The Dangers of Using the Law of Attraction to Blame Victims 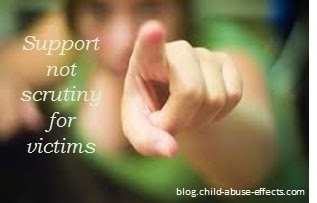 We live in a world where we blame victims for acts of violence against them. Particularly if the victim is female. Yes, in some cases, we blame male victims. But it's typically female victims that society tends to point the finger of blame.

We hear it from out-to-lunch politicians who actually believe that a woman's body cannot get pregnant from "legitimate" rape. From religious leaders who sermonize and accuse women of using their feminine wiles to seduce men rather than making men responsible for their own actions. From the people who profess to love us by asking why we were where we were and why we were wearing what we were wearing instead of asking why don't we teach boys it's not okay to rape.

And now we have people who use the Law of Attraction as yet another reason to blame the victim.

Yesterday, I shared a quote on Facebook from anti-violence activist and author, founder of Voices and Faces Project, Anne K Ream :


"It's not a lack of female modesty but a sense of male entitlement that leads to sexual violence. And the idea that we women can change a man's behavior by changing our clothes is not only disconcerting, it has been debunked. As millions of women know all too well, no one ever avoided a rape by wearing a longer skirt."


"If you understand the simple truth about your existance - that you are vibrational/non-physical more than physical, and your vibration determines the outcomes of your life - you will understand that only low self-worth and fear lead to unwanted outcomes. Blame never solves anything. Raising your vibration begins to solve everything. In plain english - no self-respecting individual, man or woman, can experience any acts of violation. It is Law."

How does it help the person who was victimized to tell them that because you have low self-worth and fear, you led yourself into sexual assault? How does such a statement and mindset make a real difference in a world where sexual assault is a reality for millions of women? When sexual assault is used as a weapon of war?

Do we blame children for the abuse they suffer at the hands of someone they love and/or trust? Do we tell them that had they felt better about themselves they wouldn't have been neglected, or sexually, physically or emotionally abused?

Did we tell 14-year-old schoolgirl Malala Yousafzai that defending her right to an education somehow kept her self-worth so low as to invite the Taliban to shoot her in the face for standing up for herself?

Are we to unsympathetically say to the families of the 200+ Nigerian girls who were abducted and possibly sold into sexual slavery, oh well, your girls were a vibrational match to their abductors, so deal with it? Had you taught them more about the Law of Attraction they'd be safe in the comfort of your arms as we speak?

Of course not! We act.

We live in a world of contrast. In some cases, terrible horrible even heinous contrast. And whether or not what happens to us is as a result of our vibrational frequency isn't as important as our ability to be human beings first.

Those who have been victimized deserve our support, not our scrutiny.

There are many aspects of our lives and what goes on in life that we simply do not understand. The question of why bad things happen to good people is an age old question. And though we must ask the question, we must also be prepared as human beings to provide the necessary support for the benefit of those who have been victimized.

It is also important that there be appropriate consequences for the criminal actions of those who have done the victimizing.

The person who was abused as a child may well go on to abuse other children. Or instead, find great purpose in what they endured by being an advocate for others who have endured something similar. But when we know or suspect that a child is being abused, we must step up and stop the abuse from continuing.

As for Malala, her painful experience has catapulted her to the world stage. And she has taken to it in the most gracious way. She is a strong and peaceful voice for the education of girls the world over. But as a member of the human race, we do not excuse what the Taliban did. We condemn it.

The 200+ girls who were abducted in Nigeria is still playing out, again, on the world stage. This atrocity could very well be the catalyst for change that is necessary to ensure the safety of other girls in the future. Or there could be some other grander purpose that will play out in the days to come. But no matter what, we as a society cannot be content to say that such vile actions on the part of the abductors is "vibrational matching". We must be prepared to bring down consequences for these criminal acts.

No one knows with certainty exactly why we are here. Though many claim to know;. And no one can say that one universal Law is responsible for all that happens. There is way more going on than we can possibly understand. But we can all be understanding of those who have had awful things happen to them, and then act and speak and comment in a way that is just, not just justifying.

Posted by Darlene Barriere at 8:41 AM