Is There a Difference Between Curing and Healing? 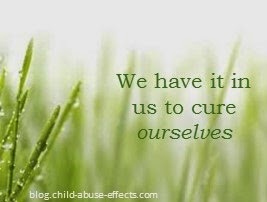 Is there a difference between curing and healing? Can the two really be separated? Are they the same thing, or are they very different aspects of something that ails us?

I read a thought-provoking article about the differences between curing and healing. While I agree with much of what the author shared, I did take issue with one of her assertions about Western medicine.

The author described Western medicine as "curing". Curing in that doctors try to rid the body of the disease or ailment in order to bring the body back to the state it was in prior to the illness.

Hmmmm...I can understand what she's saying, but I disagree on one fundamental issue: I don't believe Western medicine is at all interested in curing much of anything.

Western medicine has been tainted by the pharmaceuticals. And if you don't believe that, the next time you're in your doctor's office, check out all the free samples of drugs that are laying about.

Yes, there are drug salesmen going around to your neighbourhood doctor's office in an attempt to sell them on the latest greatest drug to deal with whatever it is that is the ailment de jour. Blood pressure problems: Lipitor. Digestive issues: Nexus. Depression: Cymbalta.

But you don't have to go to your doctor's office at all these days. Just watch the commercials on your television. Or read the ads flashing themsleves in the right and left hand columns, as well as the top and bottom of your computer screens. They market direct to us every minute of every day so that we will go willingly to our doctors and ask by name for the very drug they have convinced us we need.

And we do. And we do so without even thinking about the side effects that they are legally required to share with us at the end of those ads. Side effects like thoughts of suicide or even death.

Even the term "health care" is a bit of a misnomer, don't you think? There is no care for health. It's all about managing sickness. So it's best called sick care. Or as I call it, "I hope you stay sick care".

We have a "run for the cure". But did you know that all the money raised for this seemingly noble cause ultimately goes to Big Pharma? Have you ever asked yourself why, after all this time, after all the money that has been raised, we are no further ahead when it comes to curing cancer than we were a century ago? The rates of cancer continue to go through the roof. Why? Because they is no money in a cure.

We live in a system where Big Pharma (also known as Big P, as in Big Profits) calls the shots. I've said it before: Big P isn't interested in cures, they're interested in customers. And they can only keep customers and make big profits if there are no cures.

Big P is so entrenched in our system, we don't even know we are being manipulated. We don't know we are being sold a bill of goods on every front. They've convinced us there are no cures for many illnesses and diseases. But what if there are cures all around us?

What if the information we've learned our whole lives is all back-assward? What if we start questioning everything we've been told about...well...everything?

What if that perfect weed-free lawn that we're supposed to strive for depicted in those uplifting spring-is-here type of commercials is really about ensuring we kill off all the dandelions that might have healing properties?

What if the type of plant-based fat that has been demonized for decades has a gold mine of benefits when such fats are included in our daily diets?

And the really really big one: What if our own bodies are capable of healing themselves with proper nutrition?

We've lost touch with our ability to heal ourselves. In part, because we've been convinced that we can't. All so that there are guaranteed profits to gluttonous corporations.

We've gotten to a place where we consider energy healing, meditation, and the body's abilities to self-heal as "alternative". How did that happen when so-called alternative methods have been around for millenia, yet Western medicine has only been around for about 100 years?

What elevated Western medicine into the realms of accepted practices over time-honoured alternative (what is truly traditional) medicine?

What happened to allow practices that keep us addicted to drugs that serve more to empty our pocketbooks than they do to rid us of illness or disease? Not as an exchange for services rendered, but rather, as a ploy to keep us coming back for our fix?

We've been duped. Systematically brainwashed. We are bombarded with messages that we are not enough. Messages that tell us we deserve more than what our miserable existence is giving us.

But more to Big P comes in the form of little yellow, pink or blue pills that aren't designed to cure what ails us. And when those pretty little pills don't cure what ails us, we've been conditioned to go back and ask for even more. Then Big P to the rescue with back-up drugs to boost the first drug that didn't work in the first place. All in the name of Western medicine.

Our innate abilities have been suppressed, even repressed, in the interested of profit. I'm not suggesting that we all stop seeing our doctors. I've had medical situations in my life that have been helped as a result of a doctor's care. But none of the care I've ever received from Western medicine came close to truly healing me the way that truly "traditional" methods have.

On the issue of combining both traditional and Western medicine, the author of the article mentioned above and I are in agreement. At least we are at this time.

I say at this time because I believe that as we become more conscious, we are going to find that all our answers, be it about ailments, anxieties or adversities will be cured by going inward.

By going inward, we will tap into what we have long forgotten: that we are already complete and whole, and that whatever ails us is not a symptom of something wrong with us, but rather, a sign that we have lost our way.

Posted by Darlene Barriere at 9:59 AM