Do You Ignore the Signs? 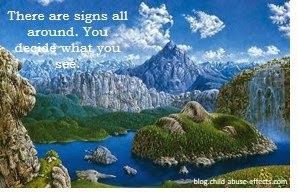 Have you ever asked for a sign that what you're doing is the right thing? But when you do get a sign, you write if off as not the right sign? Maybe you don't write it off consciously. But you ask the Universe, or what you might call God or Source or Divinity, to give you an answer, but you keep asking. Even when a sign has presented itself.

Aren't we humans the most complicated creatures!

I'm actually pretty good at recognizing signs in my life. I get them all the time. Even when I didn't realize I was asking for them. But then again, when I think about it, we're actually asking all the time. Aren't we? That's the nature of being human.

Asking is just another word for desire. Yes, I'm referring to the Law of Attraction here.

We are asking when we show a preference. Because we cast aside what we don't want in favour of what we do.

We are asking when we display displeasure. Because in displeasure, we are getting closer to what we really want.

We are asking when we set an intention. Intention might be easier to identify as asking because intention really does speak to desire. However, we must live our lives within the code of that intention if we are to realize that intention. Which brings me to  gratitude.

In other words, we are always asking. And there is nothing wrong with that.

There times when we're asking for one thing, but really want something else. We don't ask for that something else, possibly because of guilt. Or anxiety. Or fear. Or perhaps out of a sense of responsibility. Commitment. Maybe even loyalty.

But if the Universe sends a sign that gives you permission to get out of that responsibility or commitment, then you wouldn't be disloyal. You wouldn't feel guilt or anxious. There might not be fear giving it up, because after all, the Universe spoke. The sign was right there in black and white.

Trouble is, that's not how things work. We live in a world that is not black and white. And it's not grey, either. It's in vibrant living colour!

When we limit ourselves to black and white or grey, we block the flow of energy. We come from a place of lack, or at the very least, from a limited place.

So when you ask for a sign, be prepared to see the sign for what it is. That you ARE following the "right" path. But also understand that there are no wrong paths. All paths are right, for one reason or another. Even if it's only to create contrast.

More importantly, come from a place of gratitude. And live by your code of intentions. Because when you do, you will see signs everywhere. And those signs will turn up as opportunities. Opportunities you never dreamed possible.