If it isn't Serving You, Serve it its Walking Papers 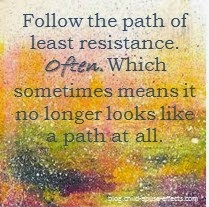 There are no wrong paths. Only paths that are more difficult than others. Nice thing is, we get to choose the path we walk. Even nicer, we get to change that path at any time we choose. And now more than ever, we all need to be ready to change paths. Often. So often, it may seem as though we are not on a path at all.

We are going through a time right now that has never before been experienced. All of us are feeling stuff we haven't felt before. Or if we have felt it before, perhaps never to the degrees we are now. Why are so many of us being impacted in such emotional ways?

I've written, as recently as this week, about the consciousness Shift that we are going through. Not just as a species, but as a planet. In other words, Mother Earth and homosapiens are on this unique journey together.

So what does it all mean? Is this our "dark night of the soul"? Or something else?

It's kind of all of the above.

But rather than see what we are experiencing as some type of "dark night", I prefer instead to see it as something more positive. An opportunity (there's that word again) to process our crappy stuff in order to allow more light in. Because, let's face it, what we are going through during these tumultuous times is way more than just a "night". It's roller-coaster-like. Peaks and valleys that are taking us on one heck of a ride! Over the course of seemingly endless time.

So what can we do about it? Short of crying day-in day-out. Or falling into the depths of despair.

In a phrase, if it isn't serving you, serve it its walking papers!

Next step is to allow whatever isn't working to be released so that something else can come into your reality. The way to allow is to process your emotions first, but it's also to change your perspective. This will lead you to a path of less resistance.

Choose to get out of the "why me" mindset. Instead, say, "why not me"? Be pragmatic. If not me, then who? I'm not a victim. I'm really quite strong. If it's happening to me (or better yet, for me) why not embrace it. Don't resist, otherwise it will persist.

Whatever negative thing you're telling yourself, tell yourself the exact opposite. Even if you don't believe it just yet. The idea here is to introduce a different thought. Then live with that different thought for a while. Embrace it. Find reasons, or better yet, examples that it might be true. Then see what happens.

When we hang onto what isn't serving us, we only serve to bring more misery into our lives. But when we question it, change it up some, and look at it with a different set of eyes, suddenly everything changes.

And when change happens, we've experienced some form of release so that something better can come into our lives. Which can lead us to the path of least resistance. Which will ultimately lead us beyond the full consciousness Shift we are all currently experiencing together.

Posted by Darlene Barriere at 9:37 AM