There is Great Purpose in Negative Emotions 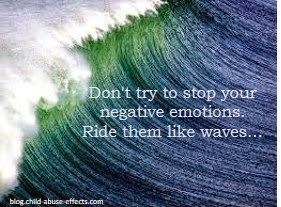 Have you been feeling down? Not just down, but downright emotional? Or depressed, even? Perhaps the emotions are running deeper than you knew possible. Something seems to be happening to many of us. Many of us who don't typically experience bouts of prolonged emotional turmoil. Leading many to ask, "Why is this...whatever this is...happening to me, and why now?"

Relationships are breaking up. Even some long-term ones. Friendships are changing, if they're surviving at all. Questions about the work we do or the job we're in are leaving us wondering about our choices. In some cases, our purpose. Each of us are dealing with a flood of emotions that seem to have come from nowhere. And now we're questioning the meaning behind the crappy way we're feeling.

And I'm not at all immune.

Last week, two weeks after my 56th birthday, the day of the night of the "blood moon", I experienced one of those difficult times. Triggered by a series of events out of my control. Events that impact what I do and how I get what I do to the people who need it most.

It was an emotionally charged day. One that lasted several days, actually. I fought back unexplainable tears almost from the time I got up. I felt purposeless. As though what I do doesn't really matter. And I suppose in the grander picture, maybe it doesn't.

In truth, there are no measurements available for me to apply to what I do. No statistics that show what Darlene Barriere does in her work decreases "x" or increases "y" by single or double-digit percentage points. Nothing like that exists. What I do is intangible.

But what I do has always been intangible. That has not stopped me from believing, actually, knowing, that my work makes a difference. What suddenly changed?

Traffic on my website changed. Dramatically. Measurably. By 75%. In a downward direction. As a result of Google's algorithm updates over the past 2 years. And now I must re-write or re-vamp each and every one of the pages on my site in order for Google to "recognize" me as legitimate. But there is no guarantee they ever will.

It felt as though all the work I've done over the past 10 years or so to build my site, my reputation, my ability to help others, has been for naught. Especially given the 1000+ hours and counting I've already dedicated to re-vamping and re-writing. I now must chase Google's approval. Which set off a whole series of you're not enough triggers.

Someone I talked to suggested I shut everything down. That I pull the plug on my website. Her reasoning was basically that anything that causes so much turmoil and work, without benefit of gobs of income or reward, is surely unworthy of continuing.

I told her about vulnerable people sending me their stories to publish. In many cases, the story they send is the first disclosure they've ever made. And they make it in full confidence that those stories will be held in high regard and treated with respect and dignity.

And that's when she understood.

To shut down the site would be tantamount to telling the people who trusted me that their stories are unworthy. In effect, I would be doing to them what every other person they tried to tell did to them: betrayed and abandoned them. And that would be putting those who are already vulnerable in an even more vulnerable situation.

What I do carries a great deal of responsibility. Even without the measurable results. But no matter what, I cannot allow external forces to affect my own worth.

This whole thing with Google is just another external force that I can choose to see as useful. A trigger that's offering itself up in order for deeper healing to occur within me.

We are living during a time of a huge consciousness Shift. And with this Shift comes the unexpected. And the unexpected sometimes rears itself in hard-hitting, take-you-down-at-the-knees emotions.

I believe every one of us has a responsibility to clear the emotions that continue to surface. We can no longer bury them. Or ignore them. These emotions are hitting us harder than ever in order for us to ensure they are not ignored or suppressed. In ways that sometimes seem cruel. But what better way to force us to deal with such emotions than to strike at the very heart of something we care deeply about.

Google did me a favour.

We are the ones who are clearing the way for those who will follow. Part of our purpose for being here during this time is to process our deepest emotions so that the negative is released. And when we do so, ALL is affected because we are all intricately connected through energy.

This ride we are on is the mother of all roller coaster rides. Our peaks can be nirvana-like and depressingly fleeting. Our valleys seem to stretch on endlessly, casting us into a darkness where light cannot stream. But with focused intent, that light will eventually shine through.

Writing helps. A lot. Like a good cleansing cry. Take good care of yourself during these low times. Don't try to stop your negative emotions. Ride them like waves. And know they are purposeful, even though you cannot yet see what that purpose might be.

We are in the midst of a time that has never before happened on Earth. A time where all of us must come together to process negative energy so that the positive can shine through. There can be no greater purpose than that.

Posted by Darlene Barriere at 11:47 AM