Do We Have Our Priorities Straight? 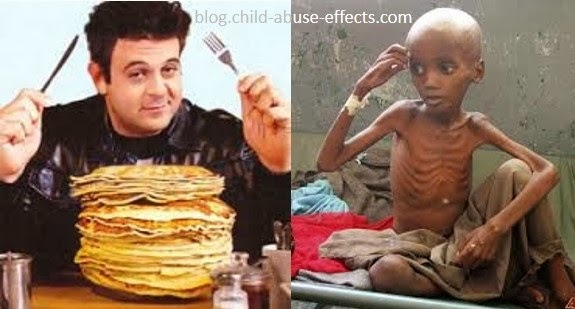 Imagine a world where there is so much available that we don't ever have to consider that there might not be more. A world where the word scarcity has been replaced with plenty. A world where food isn't a precious commodity, but rather, a  prized accomplishment.

We don't have to imagine. This world already exists.

It exists in contests to see if a person can eat a 10-pound burger with all the fixins', along with a 5-pound side of spicy-hot fries. Or a 24-inch pizza with 10 pounds each of various meats and ooey-gooey cheese mounded and melted on top. Or a foot-high stack of 14-inch pancakes sandwiched with greasy sausages, bacon and ham.

To be wolfed down within a preset time of 50 or 60 minutes.

All for the glory of a chance of having your name etched for all to see on some restaurant's wall of fame.

Sound familiar? This is the premise of at least one, if not two TV shows that I can only hope are now off the air.

Irrespective of what eating such gluttonous amounts of food will do to the human body (gastrointestinal issues, heart attack, stroke, obesity, dumps that defy human capacity), how can we as a society find entertainment value in such contests?

How can we be so cavalier about what is supposed to sustain and nourish us?

I will point out that the host of what is probably the most well-known of the gluttonous programs has since quit the show. I won't promote the reruns here by announcing the name of the show.

But the host reportedly didn't like his "doughy face", so he dropped some 60 pounds. On purpose. With foresight and forethought.

Nearly 1 billion don't get to make that choice. That choice is made for them.

In a world that has its priorities disturbingly upside down. A world that doesn't care about what they know but refuse to see. A world where each of us has the ability to put an end to such twisted ideas where plenty is only for some, but not for others.

With almost 1 billion people going hungry, starving or dealing with famine, many of them children, where are our priorities? Where is our sense of decency?

Imagine a person near-death from starvation. Stomach achingly bloated from malnutrition. Muscles wasted, used by the body in desperate search of food. A barely-living skeleton.

Now imagine that dying person watching a TV contest where one eats, not for nourishment or sustenance, but for the sheer entertainment value of a society with so much that it can afford to waste volumes of food in one sitting, on one individual. And make them sick of overeating in the process!

When we value such wanton waste in the name of performance and outright amusement, we've lost our way. We've lost our humanity. We've forgotten what our responsibility is here on Earth.

As a society, we cannot endorse such excess in the name of entertainment. And we cannot continue practices that feed our greed while starving nearly 1 in 7 on the planet. We must awaken to what we've all been party to.

We owe it to our fellow human beings to ensure that all are nourished. We owe it to everyone to respect what is there for our sustenance. What needs to be there for all.