When Celebrities Get Into Trouble We Lose Our Minds 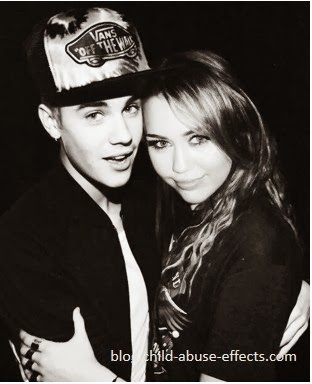 Recent photos of Justin Beiber and Miley Cyrus have been finding their way around social networking sites. One has them morphed into one person, claiming they are so close in appearance they could be twins.

So I began to wonder, what is it about Justin and Miley that can bring up such hateful emotions and feelings? What is it about their behaviour that brings out the nastiness in people who would otherwise be reasonable individuals?

I also have to ask, what gives anyone the right to judge someone elses life? Someone elses problems? Don't we have enough of our own?

We tend to look at those who are rich and famous with a different eye. We see them as having everything. Everything we could ever want. All the advantages. So how can they behave so badly when they have it all? Is that part of what's going on?

Is there an underlying jealousy present? A jealousy that they have so much? Which gives us license to go after them with both barrels when they act out in ways we find distasteful?

We have higher expectations from those who are in the spotlight. Maybe we idolize them. Maybe we live vicarious through them. Maybe we supported them by buying their songs and products and even bought tickets to see them in person. So when they disappoint us with behaviour that is unacceptable, do we feel so betrayed that we feel justified in putting our hate on? Is that what's going on?

We can't seem to get enough of the pictures and the news clips. We discuss how terrible these people are with our peeps on social networking sites, at the office with our co-workers, with our spouses over spaghetti and meatballs. We judge them for being immoral, even criminal.

But do we see our part in all of it? I would have to say a resounding, "no, we do not!"

But we DO have a part in it.

While I agree that the behaviour of both Justin Beiber and Miley Cyrus is inappropriate, I also see that as a consuming public, we HAVE contributed to their antics. In part, because we can't get enough of them. In larger part, because we have set them up with our expectations and our adoration.

Both Justin and Miley were--and for all intensive purposes, still are--kids. Kids. Their lives have revolved around what isn't real. Their fame. Their stage presence. What their adoring fans believe them to be as a result of their fame and stage presence.

Yes, they're paid insane amounts of money for what they do. But does that preclude them from us looking at what is really going on in their lives? Does that give us permission to actually hate, loathe and despise them?

When we have such negative feelings for others, no matter what their "sins", it speaks more about us than it does about them.

Chances are, you wouldn't hate, loathe or despise your child for doing inappropriate, even criminal acts. You'd probably feel those feelings about the behaviour. But not the child. The child you would love unconditionally.

Love is the answer. Not hate.