How Do I Forget When All I Can Do Is Remember? 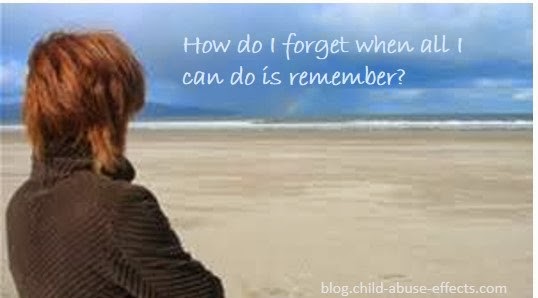 How do I forget when all I can do is remember? This is by far the #1 question I'm asked as a survivor coach. And I'll admit, it's a bit of a loaded question. Short of a lobotomy, how does anyone truly erase the trauma that has been fused so strongly to our memory banks. The answer lies in your definition of "forget".

If you're looking to remove the memory as though it never happened in the first place, chances are you'll be infinitely disappointed.

If you want to be able to live your life without constantly remembering and having those vile memories adversely affect your life, then the good news is that is totally possible.

There are 5 keys to "forgetting".

1. Re-claim your emotions...don't fight them: Whenever a memory surfaces, allow yourself to feel the pain of it. I know this is challenging. After all, the reason you want to forget is to not feel the pain in the first place. But this is an important step. Allowing yourself to feel the emotions that well up inside is paramount to releasing any blocked energy you have. It's your blocked energy that will keep you from moving forward.

Don't wallow indefinitely. Just allow yourself to feel the emotions, whatever they are. Focus on where you feel it. Is it in your chest? Stomach? Throat? Head? Back? Somewhere else? When you recognize where in your body you actually feel the physical reaction of the emotions, breathe deeply into that area to allow the energy to flow freely.

2. Re-place negative emotions with positive ones: After step 1 of re-claiming your emotions, it's important not to stay in them indefinitely. Focus on something that will bring about a better-feeling thought. It doesn't have to be a memory. It can be something you desire. Something that will help you shift your vibration. Don't jump ahead to this step. Doing so will only serve to bury the emotions that are fighting to be released. Release them first, before replacing them.

3. Re-frame what happened to you: It's been said that hope is giving up the idea that things could have been different. Don't try to come up with a way to change what cannot be changed. Instead, ask yourself, what did I do differently in my life as a result of what I endured? Only consider the positive.

Perhaps you made choices on how to raise your own children that ensured they would never be struck.

Maybe you decided to go into a field that would help children who came from something similar.

Perhaps what happened to you awakened an artistic impression that wouldn't have been awakened otherwise.

Whatever it was, or whatever might be awakening in you as a result of the pain you were forced to live through, see the positive attributes of that awakening.

4. Re-affirm your worthiness and your inner strength: No matter what happened to you, no matter what lies you were told either directly or indirectly, you are worthy of love and dignity and respect. You have tremendous inner strength. Believe that. How else could you have survived the terrible acts you survived?. Make a list of all your qualities. Not what you can do, but what makes up your character: kind, compassionate, loving, empathic, patient. If you need some inspiration, there's a more comprehensive list at write yourself a love letter.

Who You Really Are can never be destroyed. It is perfection itself. It is divine. And you cannot improve on it. What you can do is tap into it anytime you like by simply allowing your mind to be still. Even for just a brief moment. Washing dishes. Looking up from the computer screen. Gazing outdoors at a tree or a bird or the falling snow.

"Forgetting" is more about changing what and how you think than it is about consciously removing a terrible and traumatic memory. It's about no longer accepting the lies that you've accepted about your Self. It's about recognizing that you are not what happened to you. It's about shifting thoughts that do not serve you into thoughts that do. And that starts with self Love.

Posted by Darlene Barriere at 9:38 AM