Will Income Inequality Take us Over the Cliff or be a Catalyst for Real Change? 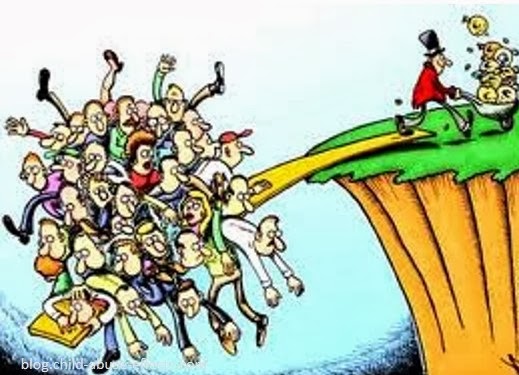 I live in a province where minimum wage is currently $10.25 hour, and has been for just under 2 years. That might sound high to people in the USA where it is $7.25. But high it isn't. How can anyone live on that in our economy?

When I was a teenager, minimum wage was a whole lot less. But so was the cost of living. I was on my own, paying rent for a studio apartment, paying for electric and heat on the wages I earned as a waitress. That was just above what was required by about 25 cents. I also earned tips, but trust me when I say not that much; I worked in a sleazy dive. One of my saving graces was that I was able to eat one of my meals at the restaurant, so I didn't have to buy a lot of food.

The thing is, I still made enough to be able to buy Christmas presents for some of my family and friends. Though I had to plan it out and start saving and buying in August. No, I didn't save enough for a retirement fund or for a rainy day. That came later.

But my point is that I lived in a very nice place with privacy, heat and the convenience of a fridge and stove. All on a wage that was just over minimum wage. It was just me, though. I didn't have to feed a family.

There has been a Facebook statement going around that if minimum wage had kept up with income growth and distribution overall, it would have gone from $1.60 an hour in 1968 to $21.16 today. Food for thought.

Based on his State of the Union address last night, President Barack Obama plans to increase minimum wage for federal contract workers to $10.10 hour. He is encouraging businesses to do the same because he knows that Congress will not act to raise the minimum wage.

At a time when corporations are making record profits, but people are struggling more and more in order to make ends meet, why are we (actually, they) so reluctant to share in the wealth?

An Oxfam factoid on global poverty and inequality shockingly reported that the world's richest 85 people are worth as much as the world's poorest 3.5 billion people.

When one Canadian mega-millionaire (megalomaniac, actually) was asked about this, he replied it was "fantastic". Something to motivate others to get into the 1%. Not a proud Canadian moment for me, I'll tell you that.

But the deck is stacked. There is no way to move ahead within a system that rewards those at the top, at the expense of those who are not.

And who ultimately pays for that?

We all do. We all pay for it in subtle ways which have been hidden. It's call corporate welfare. And it's time we cut corporations off the proverbial taxpayer teat.

I don't begrudge someone making money. Even making it big. What I do see as unacceptable is greed. Greed that is subsidized with taxpayer money and pittances for pay cheques.

Greed is an ugly thing. Greed steps all over people. It is blind to the plight of others. It uses those who are the most vulnerable to feed its already insatiable appetite. And it does so unapologetically and unreservedly.

Unless and until greed is removed from the equation, the inequality gap will get larger and larger. And this is why people are now standing up and speaking out. As members of the human race, we must all stand up and speak out.

People deserve, at the very least, a living wage.

But I am nothing if not an optimist. I leave room for the possibility that all this greed is necessary for people to wake up. For people to embrace a brand new system. A system of equity and equality. I, for one, look forward to that system.

Posted by Darlene Barriere at 10:09 AM