True Healing Begins With an Act of Forgiveness 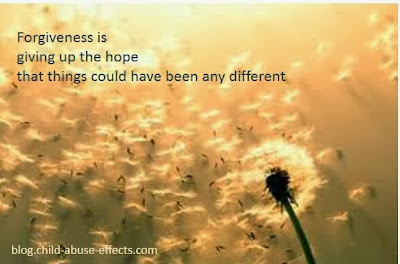 Why do we find it so difficult to forgive? Is it because we believe that to forgive is to let the person off the hook for what they did to us? Or could there be something else at play?

The title of this article alone is enough to elicit a great deal of anger in someone who has been harmed by another person. Especially if it involved child abuse.

Ah yes, those of us who have endured some form of child abuse. Humiliation. Degradation. Belittlement. Rejection. Abandonment. We've experienced it all and then some. And that has brought us to deep-seeded anger and hostility.

And what of justice? Some survivors say they want justice.

But it is no longer justice, but rather, vengeance that is sought when it comes with seething anger.

The stories and comments that visitors write on my child abuse effects website are not only disclosures of what happened. The sentiments are sometimes too hate-filled to post. They aren't calling for justice. They're screaming for vengeance.

They want the person who brought down the harm to suffer the same fate. And they believe only then will their healing begin.

But if that were true, most would be healed by now.

The fact is, the vast majority of those who go on to abuse a child have themselves been abused in some way at some point. So they may well have already suffered the same fate

Ya but, they should have known better because they knew how it felt.

Ya but, I didn't go on to abuse another child. Why did they?

Ya but, what they did to me was far worse than what they endured.

Ya but, that's not true for my abuser.

The ya buts are what we tell ourselves in order to hang onto the anger. When we decide that healing must include hanging onto our anger.

But it's that sustained anger that keeps us trapped.

When we're angry, we can't see what will bring us the most benefit. When we're hostile, we can't accept anything but what we alone consider justice. It is our ego that keeps us locked in the darkness where the anger and hostility take us.

True healing begins with an act of forgiveness. It is forgiveness that brings light into the darkness.

But that can only happen after we allow ourselves to feel what we feel. And to process those feelings and emotions. And then to bring understanding into the picture.

Forgiveness is giving up on the hope that anything could have been any different. And though many have said, and will continue to believe, that their healing has been done without forgiving thank you very much, they are kidding only themselves.

And when the self-imposed prison of anger and need for war no longer keeps us imprisoned, that's when true healing begins. That's when light enters the darkness.

"As I walked out the door toward the gate that would lead to my freedom, I knew if I didn't leave my bitterness and hatred behind, I'd still be in prison."
~Nelson Mandela

Posted by Darlene Barriere at 10:57 AM