Should We Deny Healthcare to Certain People? 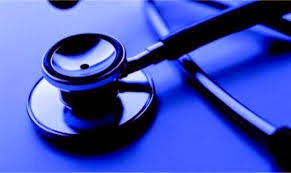 Should we deny healthcare to certain people because of the choices they make or as a result of their risky behaviours? And if so, at what age should those exemptions begin to take place? 6 years? 26 years? 56 years? Where is society prepared to draw the line? And how often does that line move to include even more to be denied?

Recently, a social networking user posted a picture of two extremely obese women. One was drinking soda pop directly from a 2-liter container. One was opening up a bottle of dressing in front of an extra large pizza on the table before them.

The user and his followers were almost militant about us (whoever "us" are) not having to pay for healthcare for the women in the picture. He felt strongly that people should be tested every couple of years from the age of 6, and if they're eating and drinking "crap" as he called it, there should be no health insurance. That they should have to pay for it themselves. Others chimed in: No healthcare if you take drugs. Or drink alcohol. Or smoke.

And therein lies the slippery slope.

It is a very dangerous practice to pick and choose who does and doesn't get access to healthcare based on any set of limitations or discrimination. Even when the decision is based on a person's risky behaviour and the unhealthy choices they make.

There are so many questions that need to be answered within such a system that may seem sound on the surface, but can quickly devolve to a place that most of us don't want to go.

Who makes the decision? What behaviours cancel your healthcare? What over indulgence writes you off as a candidate to get medical attention, unless you pay for it yourself? What might the deniable include?


The list can get endless. So how far do we want to carry it?


Where do we draw the line?

And if anyone for one second thinks it's ridiculous to go that far, just check out the way of the world. Check out how Supreme Court decisions result in more and more of what we used to consider so far-fetched as to be out of the realm of possibility. Rights that were long ago fought for and won, only to be on the brink of again being lost.

And what of addiction?

When we make addiction--any form of addiction--a reason to deny health coverage, we ignore that the causes, be it drugs, alcohol, cigarettes, food, any substance or behaviour at all, are all based in some form of emotional pain. Does not that pain deserve to be treated? Do we give up on someone because the pain they feel is hidden inside their emotions rather than inside their bodies?

And let us not forget the stupidity factor.

The moment we consider stupidity as a reason to deny someone health insurance, that puts us all at risk for being denied. After all, who among us hasn't made a choice at some point in our lives where we can now ask, What was I thinking?

So before we start talking about banning people from getting health insurance coverage, we should first check out our own risky behaviours and unhealthy choices. Behaviours and choices that could eventually lead to a host of health issues. Some earlier on in our lives. Some much further into the future.

And let us not forget that in order for such a system to work, we must have a central agency to collect the information. And that information must be accessible to some governing branch that determines whether or not you qualify as a candidate for heath coverage.

If we go this route, then ultimately no one would qualify. There would always be reasons to deny someone coverage. After all, insurance companies are not in the business of paying out, much as we like to think they are. They're actually in the business of making money. And what better way to profit than to take premiums from people, and then find reasons not to cover those very people when they need it most. This is one slippery slope I'm not willing to go down. Are you?

Posted by Darlene Barriere at 7:17 AM