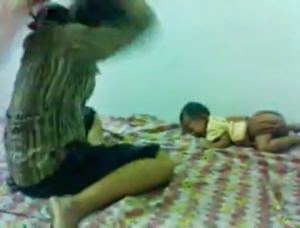 What does it take for Facebook to remove a post that shows explicit violence against a baby? Is the decision based on a certain standard at Facebook? Or is the decision left entirely up to the moderator there who looks at the post to make the call, based on what he or she thinks is appropriate or inappropriate?

Facebook took a great deal of heat several months ago for removing posts that showed women breast feeding their babies. They were deemed "indecent", then removed after complaints came in from users.

They took even more heat when it was shown that they allowed posts that depicted graphic violence, but took down what is the most natural thing in the world: a woman feeding her baby with her body.

Yesterday, to my disgust, I came face to face with an automatically playing video on my Facebook wall. The video showed a woman physically abusing a baby. It wasn't posted by someone I follow, otherwise I would have first dealt with it directly with my friend through a personal message.

Since I don't know the person who put it up on his timeline, I decided to act directly with Facebook. Though I also sent the person a private message, after Facebook included his link in their response. I asked him to take down the appalling video. When I checked his timeline this morning, I was delighted to see that he'd had the good sense to remove it.

But in my view, that doesn't let Facebook off the hook.

For those who don't know, when you are confronted with an offending post, you have the ability to hide it. Just click onto the downward pointing arrow on the top right hand side of the post. You'll have options to choose from. It is only through this process that Facebook allows you to post a complaint. Which in and of itself is both bothersome and troublesome.

When you select hide a post, Facebook wants to know why. You're then given multiple choices. The complaint option comes up when you select offensive as the reason why.

Again, the options in the complaint prompt are multiple choice. Once you make a choice, you're taken to yet another screen until you finish the complaint.

There is no comment box to register additional information to plead your case beyond what Facebook offers as multiple choice when you select a predetermined option. I couldn't tell them that the video was showing a woman abusing a helpless baby. Which may or may not have changed the decision made by Facebook. Here was their response an hour after I submitted the complaint, under the email subject line "We reviewed your report":

There is something inherently wrong with any business's community standards when it finds that pictures of a woman breast feeding her baby are offensive enough to remove, but sees nothing wrong with a woman physically abusing a powerless little baby.

And just for the record, there was word that the video might have been a hoax. Even if that had been the case--which it was not--it was still depicting child abuse. Such depictions are just as unacceptable and offensive.

But also for the record, the video is legitimate. It was first posted some time ago in order for the woman to be identified and charged. Hoax-Slayer, a site that checks out the validity of posts, has left the following message and labelled the original post as OUTDATED:


Brief Analysis
The footage is genuine. However, the abuse took place back in 2011 and the mother was subsequently convicted and jailed for the crime. The baby was placed in foster care and was reportedly doing well. Circulating the message is therefore pointless. Police have asked users to delete the message rather than sharing it.

The last line is the important one: Police have asked users to delete the message rather than sharing it.

Facebook does not provide a way to ask for reconsideration of their decision. There is no appeals process that I can find. When they emailed me, they used a noreply response. So it was the end of the line for this complaint from me.

Facebook has set up their complaint feature in such a way that it is challenging to even find, which is plenty bad enough. But the protocol they follow to determine whether or not a post is unfit for continued sharing is unacceptable.

If physical child abuse doesn't violate Facebook's community standards, what does that tell you about Facebook? What does that say about the people making the decisions at the company?

Change can only happen when we stand together. When we share one voice on the issue. And I will use my voice and whatever I have access to in order to share this important message: that the depiction of child abuse is not appropriate material for sharing. I urge you to use your voice to get this message across to Facebook.
Posted by Darlene Barriere at 6:58 AM