Take The Weight Off Yourself 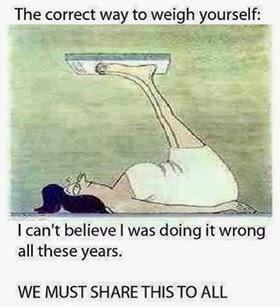 Unless you are one of the rare few who can eat anything and everything without ever gaining an ounce, chances are you struggle to keep your weight down. I know that's a very general statement, but it's true. We are a society that struggles with weight acceptance. At just about every weight.

Those who are very thin are often told they are too thin. Or, grab yourself a sandwich!

If you carry a lot of extra weight, you are viewed as unworthy and disgusting, disgusting as that is. You have to contend with disapproving and judgmental people telling you, don't you think you'd better put that sandwich down!

If you are very thin, you may be looking for ways to gain weight. And what you say to yourself can be just as destructive as someone's self-talk who's weight challenges are more, if you'll excuse the pun...hefty.

If you carry a few extra pounds, perhaps you complain about your clothes not fitting or not feeling right. Gotta lose those Christmas pounds so that I can feel good again. But within this group are also the ones who never get to a comfortable weight. Not because they can't lose the weight, but because they are never happy with their bodies.

In truth, are any of us ever happy with our bodies?

I'm among the women who struggle with body acceptance. And I've had to contend with society's disgust when I took up more room than deemed appropriate.

As a very young woman, I ballooned to over 300 pounds. And if you think that losing the weight changed the way I criticize my body, think again. My skin didn't bounce back in the way I'd hoped after losing some 150+ pounds. At least not in certain areas. Stretch marks are a constant reminder of how I buried my pain all those years ago. I look great in clothes. But I break out in hives then a cold sweat at the thought of putting on a bathing suit for all to see.

But we women are not alone in the weighty issues department.

A male Facebook friend is trying to lose weight. And he's taken to doing it publicly through social networking sites in an effort to bring some accountability to the process. He believes it will help him not only lose the weight, but keep it off. All the more power to him if he chooses vulnerability as an accountability tool.

But alongside this tool of accountability is another more insidious device: the all-knowing, tattletale, nefarious scale.

If the scale tells him he's lost a couple of pounds, it's time to celebrate (presumably, not with extra calories) and he feels great about himself.

But if the scale tells him a different story, he's heavy with guilt and shame. If he's the same weight after he's denied himself of what he really wants to eat all week long and gone to the gym 5 out of 7 days, he needs the support of everyone on Facebook to cope with his disappointment.

Heaven forbid if he's gained a pound or two. Self-loathing, depression even, becomes the order of the day.

I suggested he ditch the scale in favour of eating healthy with a focus on feeding himself what he actually needs. And yes, that includes anything that goes beyond food. "Not an option," he replied. "I need the scale to keep me honest."

My heart bled for him. I felt the pain of the trap he has set for himself. The pain of failure and defeat. But mostly, the pain of not being enough.

So if you must lose weight, for reasons of health or out of a sense of feeling more comfortable in your clothes, always do so with complete comfort in your skin. Take the weight off yourself by being kind and loving to your body.

And if you absolutely must use a scale, use it wisely. Not as a device that gives you permission to feel good about yourself when it tells you the story you want to hear. Better yet, put it away. But if you can't put it away, stick it to the ceiling!

Posted by Darlene Barriere at 8:46 AM