Out of Sight is Not Out of Mind 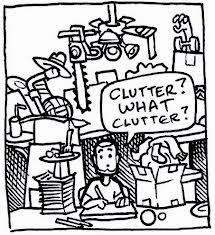 It might be hard to believe but the vast majority of us are hoarders on some level. I'm not talking about those who can't move anywhere in their house for the piles of clutter stuffed in every available inch. The people who clearly fall under the compulsive or pathological category of hoarder, where their very lives are in danger.

I'm talking about those who have a standard home but lack the time, wherewithal or organizational skills to put everything in its place, as well as get rid of stuff that is no longer useful or being used.

But even with all the skills I possess, I still have clutter. It's just that my clutter is contained in boxes and totes. Neatly stacked. All wonderfully organized. But it's still stuff. Even the word is stuffy. Clogs up the sinuses just saying it. Such an apt word for what it is.

In our home, stuff ends up in boxed homes because I'm often too busy to put it all away or get rid of it. Stuffing the stuff is a quick way to keep the illusion that the house is immaculate. Especially when our house is on the market.

Most have heard the saying, out of sight out of mind. Not so with stuff. Oh sure. We're ready to delude ourselves. But truth be told, when our stuff is out of sight it's never entirely out of mind. It sits there collecting dust just like the rest of our stuff does. And it makes us feel crappy.

Avoidance is a very close cousin to denial. Rather than deal with what's in the box, we move the entire box so we don't have to look at it. Perhaps in a closet. Or under the stairs. Or if you're lucky enough to have one, in the attic. Behind the stuff we don't use often, but need access to every once in a while. Like our Christmas decorations.

But this only works as long as we have the space to store all our stuff.

Ever notice how we can live in a house that is loads big enough, but over the years, it seems to get smaller and smaller. We gradually fill in all the extra space, storage or otherwise, with stuff we need now but didn't seem to need when we first moved in.

We acquire stuff for the children, for the hobbies, for the yard, for the house itself. For just about anything and everything. We utilize space on the floor. And when we no longer have floor space, we go up the walls. Some even hang their stuff from the ceiling!

But our stuff can easily become energy vampires, draining us of the limited energy we already possess.

Even though we hide our stuff in and behind other stuff, the clutter doesn't go away, physically or mentally, until we deal with it. I already know this. Most of us do. Yet we continue on the avoidance path because...well...we think it's easier than actually dealing with it. But that avoidance takes a toll.

Clutter can cause health problems that range from anxiety and depression to allergies and stress-related conditions like heart disease and even cancer. Though I'm not going to call my stuff cancer-causing, I am ready to deal with it.

I started yesterday. Got through half a dozen boxes. Still have several to go. But already I'm feeling more uplifted. Lighter. More energetic.

Out of sight is not out of mind when it comes to clutter, but that clutter can drive you out of yours. Tomorrow I'll share with you my own personal strategy to clear the clutter once and for all.

Posted by Darlene Barriere at 11:36 AM