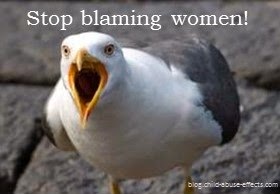 We teach children that there are consequences for their actions. That when they do something wrong, they will be held accountable. But when it comes to the sexuality and libidinous thoughts of men, young and old, our rape culture adds a waiver to the lesson: It's all the girl's fault.

What she wears. How she carries herself. How she moves. How much skin, cleavage or leg is showing. How big her breasts are. How shapely her buttocks. Where she was at the time. What she was doing before. This is how we determine whether or not a guy is responsible for his sexual behaviour. We always look to blame the girl.

And God help her if she is sexually active.

Consider the judge who sentenced a man to 5 years probation without also including many restrictions that are typically issued to sex offenders after he admitted that he raped a 14-year-old girl. A girl who repeatedly said no. The judges reason? Because the girl was sexually active and she thought the 14-year-old "wasn't the victim she claimed to be".

I can't ask, when did this happen because it has always been like this. Sure there are a few cases that get reported and go to trial and a conviction is successful. But there are a miniscule number of rapists who ever see jail time.

The people in authority are adding to the problem when, as a means of prevention, we have police officers who tell young women "not to dress like sluts". And now we have judges who during the sentencing phase of a trial tell all girls that saying no means nothing.

Girls are taught that we have all this sexual power. And then we are punished for having it when men can't stop the explosive blood flow to their nether regions.

You might have read the article about the 17-year-old teen that was thrown out of her Richmond Homeschool Prom because the 45-year-old dads that were sitting in a balcony, creepily chaperoning all the teens were lusting after her. Read the full story here.

I can still remember my own mother telling me in one breath that I must be a virgin when I get married. And in another, telling me that if I get a man worked up (her words for horny...and notice how the blame for him getting worked up was on me, not him) I'd better "give it to him" (her words for give up my virginity). She went on to explain that a man could actually die from not getting sex.

It sounded like bullsh*it to me even then. Perhaps because I didn't have a whole lot of respect for much of what my mother told me, with good reason. But the fact is, it is bullsh*it. All of it.

Women are now taking to the spotlight to bring more needed awareness to this deeply troubling issue.

In a campaign geared to show the right way to respond to excuses for rape, 31 women send the message that rape is not the victim's fault. As a professional speaker and leading authority on the subject of sexual assault, but mostly as a woman, I commend and applaud their activism.

Posted by Darlene Barriere at 8:54 AM