Is There Too Much Money in Violence? 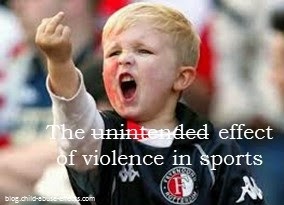 For those who don't follow hockey, it's been reported that Boston Bruins' Milan Lucic uttered a gem of a sentiment to Montreal Canadiens' Dale Weise during the handshake line at the end of losing game 7 of the series: "I'm going to f***ing kill you next year."

I don't care how emotional a series gets. It is highly inappropriate for any team member to utter threatening words to an opponent after any game, regardless of the stakes. The rest of us would be investigated by the authorities if we spewed such hateful threats to say, a neighbour.

In the age of up-to-the-minute reporting, reporters digging for juicy off-camera comments, and cameras-in-everyone's-hands for gotcha opportunities, unflattering images and violence are going to go public, if not viral. Everyone must know that.

So what that tells me are at least three things:

One, that some people just can't control their anger and hostility. In fact, some make a living on their anger.

Two, they just don't care to control their anger and hostility. Again, when you make a living off your anger, like for example, being a goon on a team where they expect you to rough up your opponent, it may well be difficult to turn that off. Not to mention, that when you're "goon material", something is already wrong.

I can remember watching NFL right-winger Theo Fluery on the ice just pummeling someone without any concern for the harm and injury he was causing. He was what's known as an "agitator". I knew in my heart that something wasn't right. That there were other issues at play.

In 2011, Fluery's victim impact statement was read in court at the sentencing hearing for Graham James, the pedophile who sexually abused him, and others, for years.

I knew it had to be something like this. And I for one was delighted that Fluery finally released the shame that kept this secret hidden and kept him in pain for so long. This was the time to use his public image for good, and good he did. He and others before him, like Sheldon Kennedy, may never know the full impact their courage has brought to other boys in sports. They are both role models for very different purposes now.

So, when it comes to Milan Lucic's threatening comments against an opponent, I'm not going to call for sanctions against him. I'm calling for answers. This is a man who in his own disconnected self-coping destructive way is crying for help. What is it in his life that is eating him up? What is it that's he's keeping secret? What can be done to help him?

The sad fact is, there are too many people making money off of his agitator ways for anyone to ask those questions, because there is too much money in violence.

And the fans hold responsibility here too.

As long as people eat up the hype, as long as they continue to dole out their hard-earned moola to see him "lose it" on-ice, no one will insist on changes. Until it is deemed that he went too far, which is when profits will begin to dry up, which is when change will happen. But not because those who make money from him care about him. They don't give a crap about him.

And as long as Mr Lucic believes he must keep these deeply hidden secrets, as long as shame keeps him deathly quiet, as long as the team and the league are complicit in keeping him in shame and secrecy, he will not ask for the help he needs.