Does A Woman Have the Right to Breathe? 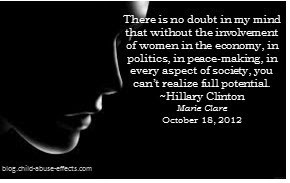 Does a woman have the right to breathe? That was one of the questions discussed at the 192nd meeting of the Council of Islamic Ideology earlier this spring. If, and I do capitalize the word IF, there is truth in the deeply disturbing answer, woman have once again been targeted. But in a way that none of us ever dreamed possible.

The Council deemed that women do not have the right to exist. That women have no inherent right to breathe. That only a woman's husband or male guardian can determine whether or not she is permitted to breathe. Which means that her life can be snuffed out at any time, without consequences.

This Council, in their infinite wisdom, also determined that there should be no minimum age to marry for a girl. Which means that girls as young as 9 years of age, quite possibly younger, can and should be married off. Of course, married off to old men who are nothing more than pedophiles who would further blame females for those pedophelic urges.

Yes, I realize this is information coming from a part of the world most of us know very little about. When I first read about this ruling in the article above, at first I wondered if it was published by the satirical publisher, The Onion. I keep hoping that it really is a spoof, albeit, a decidedly tasteless one.

I want to leave room for the possibility that there is no truth to this story, because when such information does come out, it's very easy to hate the entire culture. Or to use broad brush strokes to define every Muslim. I simply don't believe that most men of the Muslim faith carry such extreme hateful views about women.

But as a woman myself, I must ask some pointed questions: What is it about women that men the world over fear? Not every man, but so many of the men in power?

Why is it that women and our rights are always being suppressed by dictatorial legislators and religious leaders, zealots actually, in just about every culture on the planet?

What do men fear about women that brings their wrath, manipulation and condemnation bearing down on half the world's population?

Women are seemingly always at fault. Women are blamed when someone else assaults them. When men have lustful thoughts about them. And now, in what is the most vile and horrifying ruling ever to be made about gender equality, the very existence of women is purportedly against the law somewhere on our planet.

Maybe not our law. But we have our own, watered down version of extremism happening in our own back yard. Perhaps less so in Canada. Not so less so with our neighbours to the south.

So many of the men in power in the USA believe that they have the right to legislate not just women's rights, but women in general.

And when they can't actually remove the right because of another perhaps federal law that trumps their sinister agenda, they instead remove anything that provides a woman with information, services or access to what she needs in order to exercise that right.

There are even those who would ban women getting an education. Yes, even in the USA.

They would also ban a women from voting, a right fought for and won less than a century ago, because they believe women are the ones responsible for the lack of conservatism in the country. That women are somehow lesser than because they care about the lives of others.

Is this what drives such men to hate us women? Is this what is at the core of their fear?

The men who are the most extreme are the ones who fear what they cannot themselves control. So they exert that control in the only way they can. By legislating against women.

Religion is usually at the center of these powerful men. But these so-called powerful men are not powerful at all when we consider that their ideas come from a place of fear. It's fear that is the driving force behind their hatred and dominating agenda.

But women are waking up and rising up. And men are accompanying them. Men who are not the mental midgets of extremist dictatorial legislators and religious zealots. Men who are strong in their character and purpose. Women and men together, side by side, taking the reins to ensure that all are truly equal. That we all have the right to exist and breathe. No matter where we live. No matter our gender. Male. Female. Or something in between.

Posted by Darlene Barriere at 10:16 AM