The Prospect of War in a Winner Take Gold World 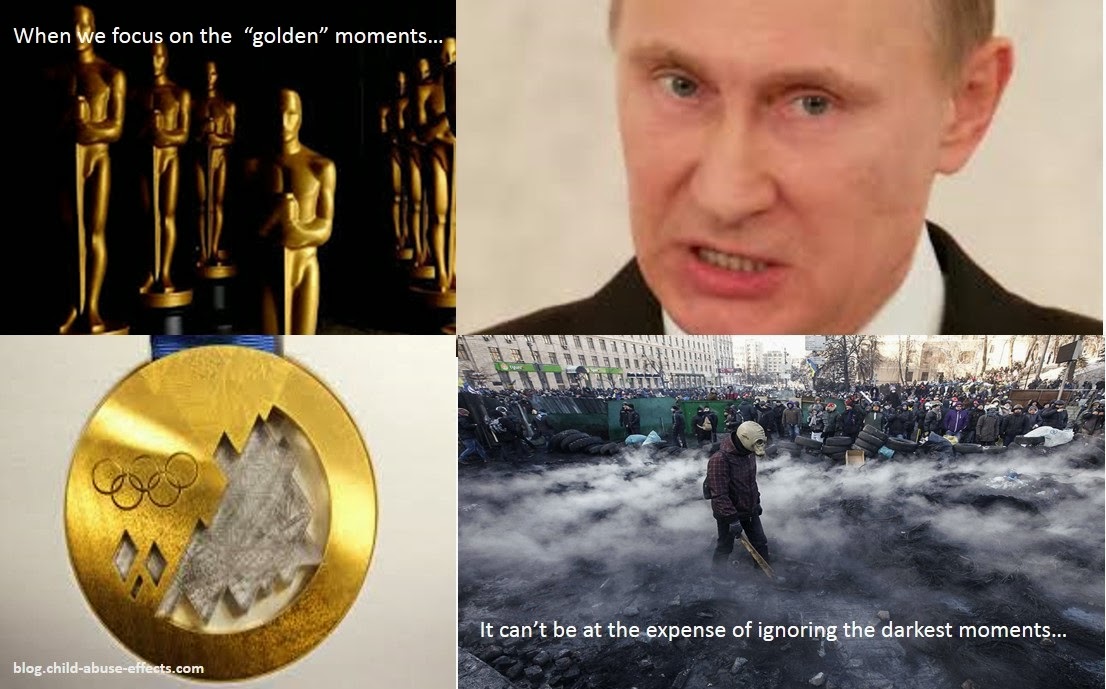 Millions tuned in to the Oscars last night. But I was not one of them. The Hollywood extravaganza has never been one of my favourites. I'm just not that into who is wearing what. Who is wearing who. Or whether or not the host will be as good as, as bad as, or as unique as hosts of the past.

The countless speeches do not appeal to me. Nor does the desperate-to-appear-happy but pain-filled faces of those nominated but not awarded. The prospect of sitting through 3+ hours of clips, snips and quips simply doesn't interest me.

What does interest me is what is happening in the world right now.

We are on the brink of yet another war. Less than 24 hours before Russia tells Ukrainian forces in Crimea to surrender by 9 p.m. ET tonight or face a “military storm”, one must ask, where do the Oscars fit in the scheme of things?

Where are our priorities? Are we that unengaged with the rest of the world that pomp and ceremony of useless awards for stuff of pure entertainment overrides the possibility of not jut a regional, but world war?

Perhaps we are. But rather than judge, I'll look at the positive.

On a connective scale, I can see the value of such pomp and ceremony. After all, as with the Olympics, whenever there is worldwide attention paid to something on a positive level, the global vibrational frequency is raised. Even for just a short time.

Anticipation. Excitement. Even fun are all experienced during such events. So who I am to say they shouldn't be broadcast. Who am I to say they have no value. Especially when such events can help, for a snippet of time, take people away from whatever may be bothering them.

So the morning after the Oscars, I'm now aware that 12 Years a Slave won for best picture. Matthew McConaughey won for best actor. Cate Blanchett for best actress. Gravity took 7 Oscars, including best cinematography. And of course, the fact that Ellen DeGeneres' epic selfie broke records on re-tweets.

I am also keenly aware of the gravity of our world situation.

A little over a week after the last Olympic gold metal was awarded in Sochi, Russia, a half a day after the last golden statute was received at the annual red-carpet event that all of Hollywood reveres, we are on the precipice of war. And there is nothing "golden" about war.

So if there was ever a time to raise the global vibrational frequency, the time is now.

Posted by Darlene Barriere at 9:40 AM