The Poison of Shame and Self-Blame 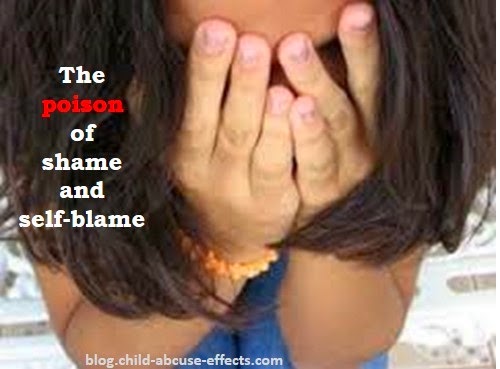 It's the 1950's. You are 18 years old and expecting a baby out of wedlock. Your family has disowned you for having sex before marriage. You've been sent to live in a home for unwed mothers, a country convent where you are providing slave labour.

At the convent, you've given birth to a breach baby without any medical assistance for pain. The Mother Superior sees your pain as penance for the sin you've committed. She seems to relish in your pain and agony. The nuns force you to give up your son by making you sign a piece of paper that gives up any and all rights you might have.

You work 7 days a week, all day. You get to see your baby 1 hour a day. Then,  in a cruel calculated twist, without your knowledge, your 3-year-old child is taken from you. Sold to a rich American couple you've never met. You are not given the opportunity to say goodbye to your child. And you never see your child again.

This is the gut-wrenching story of Philomena Lee, an Irish woman who finally disclosed what she had kept to herself out of guilt and shame for 50 years. The story of her desperate search to find her long lost son. Where it begins and where it ends.

I first wrote of Philomena's story in my January 8, 2014 blog post. But I hadn't yet seen the movie. Until this past weekend.

I knew this movie would be deeply disturbing. I knew it would trigger memories of my own dealings with the Catholic Church. Memories that I long ago processed. So there was no fear of any emotion that surfaced.

The Church, namely the nuns, were particularly cruel in the way they handled Philomena's search for her son. Even though the depths of maliciousness by the nuns toward Philomena and her son can hardly be called "Christian", she openly forgave.

But it wasn't her ability to forgive in the face of such blatant cruelty that struck me. What I found so profoundly heartrending was that her forgiveness was born of guilt, shame and self-blame.

Guilt and shame that she had enjoyed the sexual encounter with the father of her child. Shame for having "sinned" by having sex out of wedlock. Guilt and self-blame for signing her son away to the nuns and not speaking out sooner when things could have been different. As though they could really have been different in those horrible days.

So I don't see Philomena's forgiveness as complete. At least not yet.

Unless and until Philomena forgives herself, she will continue to live in a self-imposed prison. A prison she has condemned herself to live in. A prison that only she has the key to unlock.

Philomena still to this day clings to the very doctrine that has kept her in shame her entire adult life. And even though I respect her right and free will choice to hang onto that dogma, I can't help but feel sadness for the way she was brainwashed.

Brainwashed by a system that was notorious for keeping its followers in a state of shame, guilt and not-enoughness. A system that capitalized on the very shame and guilt that those followers were indoctrinated into.

Posted by Darlene Barriere at 9:32 AM