Confront Your Abusers When They Are Not Around to be Confronted 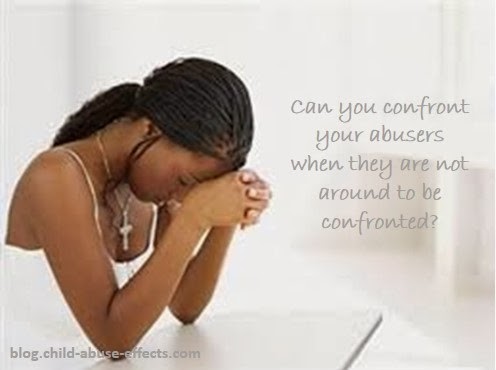 The need to confront an abuser for what they did to you as a child can be overwhelming. Endless hours spent fantasizing what you will say and how you will say it. And though I'm not an advocate of confronting abusers, I do understand how such thoughts and fantasies can take over your mind.

The need for the survivor to confront is so strong that even faced with the very real prospect of denials, minimizations and having the finger of blame pointed where it doesn't belong, one will still take the risk.

When a child is abused, in particular sexually abused, threats are often used to keep the child silent. These threats can be implied or outright. The child knows that to tell is to bring on terrible consequences. And because they believe that those consequences will happen if they speak out, they stay quiet.

And if those abused children do tell, they are usually not believed. In fact, the number 1 reason children don't tell is because of the fear of not being believed.

So is it any wonder that confrontation is so deeply entrenched in the mind of the abused.

In my line of work, I often hear about survivors confronting their abusers. The vast majority do not get what they hope to get out of the experience. More often than not, they feel re-victimized. Especially when the finger of blame is pointed at them. When they hear, "it was your fault...you came onto me." Sick and twisted, but that is the outcome for some who confront their abusers.

Even though I'm against confrontations, I also recognize that some people are driven to go forward, despite the risk of re-victimization. That's why it is so important to have done a great deal of healing before such confrontations. Why it's so important that you have a support system in place in case there's a dark aftermath.

And what of survivors who cannot confront because the abuser is now dead? I say, think beyond the typical way of thinking.

Who says a confrontation must be face-to-face? Why can't it happen even without the abuser being present in the room? Now before you write this off and say that's ridiculous, consider what the person is trying to achieve.

They want acknowledgement of what was done to them. They want the abuser to fess up. To tell them they weren't--aren't--crazy. That they did experience the abuse.

They want a deeply felt apology for all that the abuser did to them. They want to hear, I'm so very sorry. Your whole life was adversely affected. Your ability to have healthy relationships, to be intimate with someone, to keep a job. What I did caused a host of physical and emotional ailments for you.

When you role-play and take on the abuser's role, you have complete control over what is said. You're in the driver's seat. So why not try this. Why not imagine getting what you want and need. In the privacy of your own home. On your own terms. Without anyone else being around to say and do things you don't want said or done.

Posted by Darlene Barriere at 9:23 AM