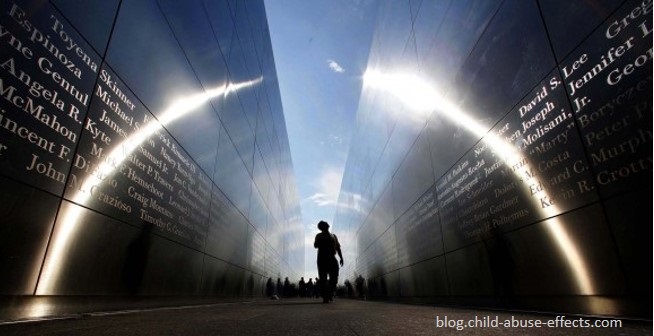 I was a long way from the epicenter. In our fifth-wheel trailer with hubby at a campsite about 3 hours from home. Home being British Columbia, Canada. But geographical distance didn't mean I didn't feel deeply as I watched in horror the second tower implode on itself.

One of our neighbors came pounding on our door to see if we'd heard. She figured we'd have our TV on the one and only channel, even if it meant one of us had to climb onto the roof of the fifth to keep the aerial in position. Besides, she didn't want to be alone during such a terrible time. None of us could wrap our brains around what we were witnessing. It was all so surreal.

For weeks, whenever we got together with someone, all we talked about was 9/11 and the aftermath. A day without any planes in the sky. The horror. The terror.

Then there was the round-the-clock coverage on just about all networks. The countless images of people running, covered in grey soot, struggling to breathe. The firefighters who had lost their lives trying to save the lives of others. The continuous replay of the planes striking and the towers collapsing. I found myself in a place of grief.

And then something wonderful rose from the ashes. A humanity that poured in before the anger of a nation took hold.

Heartwarming stories of people helping people. Heroes who selflessly stepped up to provide what was needed. The community rallied. The country rallied. The world rallied. We were unified for the sole purpose of neighbor providing for neighbor. We were all neighbors in that time. A time when the world became One.

September 11 was a terrible strike, but not for the whole day. After the towers came down, the people came through in profoundly beautiful ways. And the days that followed showed, especially in the face of such tragedy, the silver lining of Who We Really Are. And it was in those moments that the healing from 9/11 began for me.

Where were you when the towers came down?

Posted by Darlene Barriere at 10:00 AM