The World is My Mirror 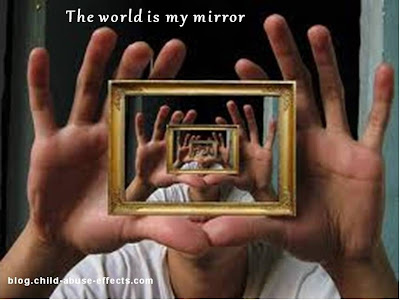 Do you ever find some people annoying? Where you want to pull out your hair when you're around them. You want to tell them off or put them in their place.

Maybe they talk too much. Maybe they interrupt all the time. Or they can't keep a secret. Maybe they don't stand up for themselves. Maybe they're a know-it-all. Or think they know it all. Whatever it is, they drive you bonkers.

What's worse is that it's almost impossible to get away from them. They're members of your family. They're your neighbors. They're at your workplace. Or worse, they're your boss. Ugh.

But what if these "annoying" people are in our lives for a purpose? Some might even say by design. What if they are there as a mirror for us? A mirror where we can see a part of ourselves we don't like very much. Or at the very least, our fears of what we might become.

Most people go through life blaming others for the way they feel and act. He "made" me angry. She "caused" such a stir. If he hadn't done that, I wouldn't have "had" to ______ fill in the blank. But in truth, others don't "make" us feel anything, They don't "cause" us to do anything. What they say or do might be a catalyst, but we alone are responsible for our own feelings and actions.

For those of us who are or were particularly adept at analysis as a coping skill (waving both arms highly in the air) we want to know what I call the where's and fore-art-thou's. Why we do what we do.

When I first started walking my own healing path, I looked to my past for reasons for my actions and reactions. It's no secret that my father was a violent man. My mother was also violent, though her violence was reserved exclusively for her kids. So domestic violence was a daily event when I was growing up.

I hated people who got angry. I couldn't stand anyone who showed any kind of anger, even if it was expressed appropriately. Until I realized that other peoples' anger was a mirror for me to see that I feared my own anger. I feared what I could do with it.

As for anger expressed appropriately, that too was an interesting mirror for me to reflect in. I feared never being able to express myself in appropriate ways. That the anger seething in me would explode and cause unspeakable devastation to others. I feared becoming my parents.


Change one thing, everything changes.

I began to see the world as my mirror. I started taking responsibility for my own actions. I stopped blaming others, including my parents. After all, I was a full-fledged adult. I was no longer that helpless child. I got to choose how I would respond. Indeed, that was the only thing I could control.

I use my feelings and emotions as my gauge. If I'm uncomfortable being around someone, I ask, how is this person a mirror for me? Can I find an example of when I was exactly like this person? (I'm always able to find an example.) And then something wonderful happens. My annoyance is replaced with understanding and compassion.

The world is my mirror. A mirror I welcome in my life. Though admittedly some days more so than others.

How are the people in your life a mirror for you?
Posted by Darlene Barriere at 10:05 AM