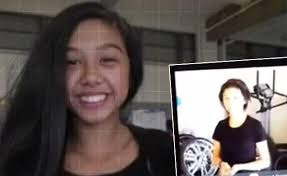 It is always time to pause when a child commits suicide. A time to ask why and what could we do to prevent such a terrible thing from happening again.


But when a child suicides after being humiliated on a social networking site by a parent, it's time to ask, What the hell was that parent thinking?


A week ago last Friday, on May 29th, 13-year-old Izabel Laxamana of Tacoma, Washington jumped off the bridge of an overpass after her father punished her, then posted a humiliating video on YouTube of him scolding her. The original 15-second video has now been removed.


The trend to online humiliations by parents have become more commonplace in the past few years. And there are some who hail such parents as heroes for daring to discipline. Others who laugh at such practices, thinking them quite funny.


I'm not one of those people.


I do not believe it is reasonable to call this ill-advised practice "discipline". It is not in the best interest of the child for a parent to tell the entire world that their child messed up, and shame them so for that mess up. When parents take that route, they fail to take into account just what is going on in the child's life. Issues that could very easily take a child to her breaking point, as it may have in this case.


We don't know for sure why Izabel took her own life. But last year, she reportedly posted that she felt bullied at school, which would have left her feeling isolated and rejected.


Home is supposed to be a soft place to land. A place of refuge. Instead, Izabel's father betrayed and abandoned her like no other at school ever could. By virtue of his relationship to her, he could not have psychologically harmed her more.


Parents are the adults in the family home. And as such, have a duty to their children to act like adults. Public humiliation is nothing short of bullying, and has no place in raising healthy well-adjusted children. It is a childish act, one that needs to be condemned in both children and adults.


I'm encouraged that there has been public outcry over what this father did. But should he be prosecuted for child abuse like some are demanding?


He cut off all her beautiful long hair, then posted a video shaming her for doing something wrong—we don't know what. His humiliating actions were ignorant, and in my opinion, just plain wrong. Some might even call it stupid.


But does what he did qualify as child abuse?


Child abuse charges are highly unlikely. Even parental stupidity on this grand a scale doesn't meet the legal definition of child abuse. Not in this case.


This father failed on many levels.


He failed as a parent in determining appropriate discipline. He failed to see and understand just how much of a struggle his daughter was dealing with. What's worse, is that he failed to comprehend how his actions would pile onto the struggle she was already ill-equipped to deal with. And now this father will spend the rest of his days with all of this on his conscience. It is sad beyond words.

I can only hope that parents learn from this man's well-intended but tragic mistake. A mistake that may well have been the final push for his daughter to see suicide as the only way out.

Posted by Darlene Barriere at 1:30 PM