Does Sunscreen Really Protect Us? 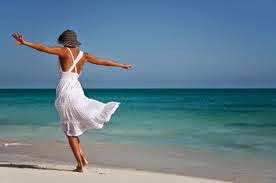 Can sunscreen be more harmful than helpful? Could it be that all the information we've been fed over the decades is nothing short of BS? And not just that sunscreen doesn't actually prevent melanoma (skin cancer) but that the ingredients in sunscreen cause humans and the environment harm?

A major Swedish study of some 30,000 women over a 20-year period revealed that those who avoid sunbathing in the summer are twice as likely to die as those who sunbathed every day. You read that correctly. The ones who stayed out of the sun were the ones most likely to die. Not the other way around.

This flies in the face of what we've been told by doctors, scientists and of course, our loving do-what's-best-for-us mothers. Most of us believed the so-called science behind the use of sunscreen as a cancer blocker.

And now the studies are showing we've been scammed.

It turns out there is no evidence that sunscreen really does what it's been touted to do all these years. It is not the cancer blocker after all. In fact, evidence is now showing that it's the sunscreen that causes cancer as a result of the chemicals that lace the creams, gels and sprays.

But no more. Not for many years now.

I don't know when I came to believe that applying lotion loaded with unpronounceable ingredients all over myself was not in my best interest. Ingredients that were so longtail they included their chemical letters and numbers in brackets. But it happened long before the studies became mainstream knowledge. It was an inner knowing that I listened to. And I'm grateful I did.

Some of the chemicals used in sunscreen interfere with the normal function of hormones like estrogen, progesterone, testosterone and thyroid.

These chemicals are also shown to affect the ocean environment and the prevalence of dual-sexed fish.

Makes you want to run out and buy a tube, doesn't it. Not!

We need the sun. It's important for our vitamin D3 absorption. And when you consider that so many of us are D3 deficient, one must also ask, Is this at least partially as a result of having used sunscreens and other chemically-based lotions and toothpaste (yes, toothpaste is also a culprit) for so long?

So what can we use instead? What works at blocking the aging and possibly damaging rays of the sun without causing human harm and mutations, especially if you're fair-skinned? Without disrupting the ocean population and environment? Without artificially reassigning the sex of other species?

Here's link for a simple homemade vitamin C spray. And while I'm not advocating this recipe as the answer for everyone, I am offering it up as an option.

Do your research. Question, not just the evidence coming out, but who is paying for the study. If it's a pharmaceutical or a company with interests in selling you a product heaped with chemicals, then it's a good bet the "evidence" is more self-serving to that company than it is suitable for human use.

Posted by Darlene Barriere at 7:55 AM