SCOTUS - The Corporate Congress of America

Whether you believe that Congress in the United States is already a corporation. Whether or not you believe government overall is, at the very least, governed themselves by corporations. The Hobby Lobby ruling that came down today by SCOTUS clearly shows that no longer do the people defining the law of the land even try to hide their corporate agenda.

In a staggeringly ignorant 5-4 ruling by party lines, SCOTUS has effectively opened the door for a complete loss of women's rights in the very near future. Rights that so many had to fight for within my lifetime. Rights that an entire generation have never had to even think of as something that needed fighting for.

It won't be long before Roe vs Wade is on the table to be dissected and completely discarded, ultimately leaving women without any rights about their own bodies and health.


In 2014, the U.S. Supreme Court is more convinced that corporations are people than that women are.
~Andy Borowitz, American writer, comedian and actor

Here in Canada, we're not yet where the USA is. But with every ruling that comes down from SCOTUS, with all the political unrest that continues to toss one right after another out on it's ear, there is the very real possibility that even our rights will continue to be eroded, because our own Canadian government has proven itself a corporate puppet.

I would never have believed that in my lifetime I would be witnessing such blatant disregard for the rights of individuals from either my own country or that of our closest friends to the south. Yet here we are. A bunch of old conservative men in black robes dictating what should be between a woman and her doctor. Period.

When a boss can deny an employee birth control coverage, where are we headed next? 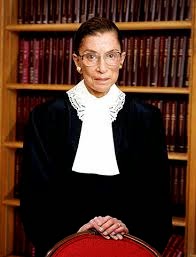 Justice Ruth Bader Ginsburg called the ruling a "decision of startling breadth." She went on to say say in her scathing dissent: "Although the Court attempts to cabin its language to closely held corporations, its logic extends to corporations of any size, public or private. Little doubt that RFRA (Religious Freedom Restoration Act of 1993) claims will proliferate."

In other words, the ruling opens the door for future challenges that will likely give more and more power to corporations over that of individuals. Her point is well taken.

But if I'm nothing else, I'm an optimist. There can be purpose in this latest absurdity, just as there can be in all absurdities.

This ruling may well wake people up to what's really going on. It may spur them to action. Because, truth be told, it's not until people get spoon-fed copious loads of sh*t that they finally get to the point where they are tired of the coughing, spitting and choking, and then finally say "enough!"

And when they finally do say "enough!", only then will real change have a chance to begin.

But if this ruling isn't enough to start the process of real change, sh*t-feeding be damned, perhaps it will take a complete strip down of all rights before a revolution begins.

The dominoes will continue to fall along the path each one before it sits, or there will be a sweeping hand that stops them dead in their tracks. Either way, disturbing as all this is, as a Canadian I can only sit by and watch. The path is not mine to walk.

But as I move through the coming days, I do so with my bowl of popcorn at the ready. I'll watch with baited breath and a belief that all will come together in purposeful resolution as the conscious and unconscious players make their calculated and strategic moves and the game decidedly unfolds.

Posted by Darlene Barriere at 2:35 PM