Growth Means Something Has to Die 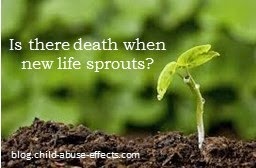 Is it difficult for you to release what doesn't serve you? Difficult to move beyond what is familiar? You are not alone by any stretch. We humans have always been challenged when it comes to change. Some of us more than others.

We get comfortable with our surroundings. Even when they aren't optimal. Many adopt the philosophy that it's better to embrace the devil we know than risk exposing the demon we don't.

But when we adopt such a philosophy, we do so at the expense of personal, physical and spiritual growth.

So why do I have to grow? you ask. In the words of Abraham:

You are adaptive Beings. And you're not finished as a species in your evolution. You are as unevolved now to what you will be 2000 years from now, or a million years from now—as the relics that you are digging up of the cave man. You are…we are all eternally continuing to evolve.

You don't have to do anything. We are wired for change. Wired for evolution. It's how we deal with change that determines whether or not we grow. And if we do grow, something has to die. Sounds morbid, but it's true.

Even a sprouting plant brings with it some form of death. The nutrients in the soil, the water it soaks up, the rays it absorbs, are all used up for the sake of the new plant. But we don't think about what it takes to grow things, what the new growth requires to be sustained, as death. We only see the birth of the new plant.

Everything is made of energy. Everything. And energy can never really die. It just changes form. When I eat something, the food is giving up its current form in order to sustain mine. Something I am eternally grateful for. The food itself dies, though we don't typically think of the death of food when we're eating.

Food for thought: How we think about death is what needs to change. It needs to evolve.


When we adopt a new way of thinking, our old way makes way for the new, and the old dies off. This applies to everything from relationships to occupations to our very thoughts. Every time we make a different choice, the choice of old is released. The energy of the old is replaced with the energy of the new. This is the way of nature. The way of the world.

So get comfortable with change. Embrace it. And know that in order to grow physically or emotionally or spiritually, something will die. Then be grateful for that death. Because in that death, sprouts new life. And that's a very good thing.

Posted by Darlene Barriere at 9:09 AM