Where Does Compassion Come From? 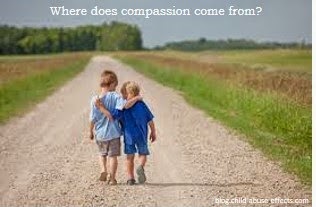 Where does compassion come from? Is it learned? Is it inherent in each of us? Do some of us possess more of it than others? And if so, once again, where does that extra come from?

I've been reading The Wisdom of Compassion by the Dalai Lama and Victor Chan as the latest for my book club. That's why this week's blog posts have been themed around compassion. Compassion is defined in Monday's post.

The Dalai Lama believes that compassion comes from the mother. In particular, through breast-feeding. In part, he believes this because of his own upbringing. He had a wonderfully kind-hearted and giving mother. But a father who was hot tempered, not at all compassionate. He carries both aspects of his parents in his own characteristics. No surprises there.

In our discussion last night about the book, the subject of mothers and compassion came up. One of the members pointed out that until one has children, often times compassion is missing. Especially on a deeper level. Like when you have to miss work because of a sick child. The boss may seem understanding, but really isn't. Until the boss has children of her own. Then compassion is abound.

And though this speaks to the compassion held by women, mothers in particular, the question I have revolves around whether or not that compassion is passed down from mother to her child.

Breast-feeding has numerous benefits. But do we have scientific proof that compassion, the emotion that compels us to reach out and help others who are suffering, is passed down through this nurturing and sustaining act?

And if it is so, then have we raised a generation or two of children who lack compassion as a result of a mother's right to choose whether or not to breast feed?

I must admit that as I delved deeper into the book, there was a part of me that bristled when I read the Dalai Lama's viewpoint on the subject. My own mother was not nearly the compassionate human being that his mother was. So it begs the question, where did I get my compassionate side?

I've always believed that my own compassion came from what I endured. Knowing how it felt. Having a strong sense of what was right and wrong. Coming to the aide of those who couldn't aide themselves. Finding purpose in what I was forced to go through.

So did I get some of my compassion by my mother's breast?

Fact is, she wasn't the most loving person. Not toward children. She saw pregnancy as a sickness, breast-feeding as a painful experience that she didn't want to continue. It didn't help when she got what was then called "milk-fever" or "mastitis". In those days, doctors prescribed dry-up pills. And she couldn't wait to get her hands on them for every other child she gave birth to. Nowadays, medical professionals encourage more breast-feeding in order to effectively extract the milk. If my mother had been forced to do this, I'm sure she would have ended up in the psych ward of our local hospital after the birth of each child. Oh wait...she did!

It may seem as though I digress with all this information, but it needs to be considered if one believes that compassion is transferred from mother to child through her breast-feeding. Because then the question becomes, what if that breast-feeding was interrupted or was a terrible experience? Would that not also have an effect on the child's capacity to be compassionate?

There are no absolutes in this world. And there are always exceptions to any rule or theory or hypothesis. And whether or not those of us who had mothers that were not themselves compassionate people, or who either chose or couldn't continue to breast-feed, there must be other factors that determine our ability to be compassionate.

I'm living proof. But no matter where I got my ability to be compassionate, I fully embrace this emotion that compels me to use what I've lived and learned in ways that help alleviate the suffering of others.


...it is important to cultivate compassion for our own humanity. When our hearts open to our own suffering, we begin to also be more accepting of others and to realize that they too have the same struggles.
~Rabbi Jeff Roth

Posted by Darlene Barriere at 8:28 AM