What Team Are You On? 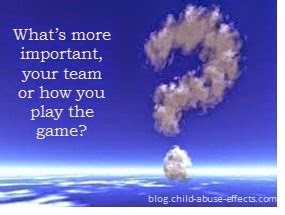 I just read a Facebook post on my wall that truly struck me: You're either on Team God or you're on Team Devil. Really. I mean, REALLY? There are only two choices? By virtue of what I don't believe, that makes me evil? A Satan-lover? There's nothing in between? No room for anything else?

We see and hear it on the news. In our movies. And now, on our social networking sites. And I'm sick and tired of it! Who the hell are these people who are so laser biased that they think their way is the only way. And if not their way, then the way of evil.

When did such polarization become so flippin' popular?

So many have used the "you're either with us or against us" BS line to further their agenda of bringing what they deem as bystanders or those who are unaligned into "alignment". Yes. Into. Alignment. Into their way of thinking. In other words, control us in some way.

There are no absolutes. There is no black and white. The world is filled with grey. And various shades of it too! A lot more than fifty, if you ask me.

No, I'm not with "Team God". Certainly not your version of it. Not yesterday. Not today. And probably not tomorrow. Though I always leave room for the possibility. I'm staunchly fickle that way.

And I'm not in favour of armed warfare, either. That doesn't make me any less. It doesn't make me evil. It makes me mad! Mad at the forces who constantly try to control and manipulate. On EVERY side of EVERY argument!

I'm tired of the manipulation. Tired of the implied threats. Tired of hearing that no matter what I choose to believe or the way in which I choose to live my life, that I'm being duped or controlled in some way.

I'll live my life in a way that feels true to me. Not someone else's version of what I should be feeling or how I should be living.

Clearly, I'm in a feisty mood today. Perhaps fueled by a week's worth of truly despicable comments that surfaced by haters who have been given a platform and a mic. And that doesn't include all the polarizing politics and backward thinking politicians that could adversely affect me as a woman.

Whether it's Donald Sterling's racists comments to his half-black-half-Mexican mistress. Or Cliven Bundy's contemptible comparison between slavery and government assistance for "the negro". Or my Facebook friends' implied threat than I am going to hell in a hen basket because I'm not on what he decided to deem "Team God".

So to answer my own question, I'm not really on a team. I play the game, but with my own set of rules. Guidelines, actually.

The reality is, not many people share in what I believe. No one is coming out of the woodwork saying, Yes, Darlene, I believe what you believe. I'm often the outlier. That can be a very uncomfortable place to be. A place where you don't have belonging. Trust me when I say that that is a highly vulnerable way to play the game.

But on second thought, if I look at the word itself, Be-Longing...perhaps I'm exactly there. Longing to be with people of similar mind. And then again...maybe not. Perhaps that needs to be explored in another post.

Posted by Darlene Barriere at 9:55 AM