Is a Spiritual Path a Conscious Choice? 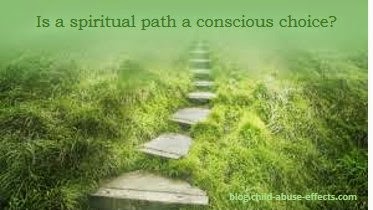 I suppose the answer lies in your definition of "spiritual path".

It's no secret that I take issue with organized religion. Religion that spews hatred for certain groups of people, while also claiming to love thy fellow man.

So many crimes have been, and continue to be, committed in the name of religious beliefs. Beliefs that are thrust down the throats of others who simply don't believe the same.

Core values are often the lead-in to deny someone else of the right to a different belief. Or no belief at all.

Certain terms are adopted that suggest something completely different than that which is being identified.

For example, the term "family values" sounds very noble. But it is not just a core set of values adopted to bring up a family of respectful, kind and compassionate people. Rather, it's a conservative movement that works hard to deny the rights of others. In particular, marriage equality for all.

Another example is "right to life". Here again, the term has a decidedly noble ring to it. But it has nothing to do with preserving a quality of life to anyone who currently lives. Instead, it's sole purpose is to deny women a choice. It's all about enacting legislation that strips a woman of her right to choose. All under the guise of doing "the Lord's" work.

What does all this have to do with whether or not we're all walking a spiritual path? In my view, plenty.

I most definitely separate spirituality from religion. I don't see them as related at all. I see them as distinctly different. And it irks me when they are grouped together as one. It's a pet peeve of mine, if you haven't already figured that out.

I don't begrudge anyone the right to their own religious beliefs. But I do draw a line when it comes to someone shoving their beliefs into the face of others who believe something different.

I was raised on a steady diet of Roman Catholicism. Where, in the name of the religion, parents had the right to beat and humiliate their children. In fact, it was encouraged. Where church priests could do no wrong, even though they were wronging the smallest and most vulnerable in society. Where "God" was vengeful and passed judgment on all who sinned, which was all of us, because we were all considered "sinners".

I walked away--actually, I ran--from all that when I was still a teenager. I lived a life that was in line with atheism. Was that a spiritual path? Not by my definition.

I still don't typically use the word "God". I tend to bristle whenever that word crops up. For me, it has a very negative connection to it. I simply don't believe there is a Being controlling all that is.

I believe there is energy, and that we are all part of that energy, individuated. I believe that there are forces within that energy that makes us all creators. Universal laws. The Law of Attraction is one of those forces. Another is the Law of Cause and Effect, also known as karma.

My own spiritual path started about 10 years ago. That's how I see it. Because for me, my spiritual path was a choice I made freely. One I made with my mind. The choice to live from a heart-centered place. Walking that heart-centered path is the spirituality. To be told otherwise tends to ruffle my feathers in the same way that having religion shoved down my gullet does.

I'll concede that my viewpoint has a great deal to do with my own personal experience with religion. Perhaps to my detriment. It is my viewpoint nonetheless.

And while I would agree with the latter part of the argument, I do not believe the human experience is always a spiritual path.

I get where they're coming from. There is a journey we are all on from the day we are born. The one of life. And that for some is enough to say that it's the spiritual journey.

From my perspective, when I "walk" a path, any path, I am making a conscious choice. A choice about how I will interact with the world and myself. A choice that I will live a heart-centered existence. Consciously.

Whether or not I've made the argument make sense, it is what I believe. And I have not been convinced otherwise by the arguments presented among the group of friends I was recently gathered with.

I will concede, however, that the term awakened might be an appropriate term to encapsulate my definition of a spiritual path.

Posted by Darlene Barriere at 9:15 AM