Body Speak is Not a Reliable Means of Communicate 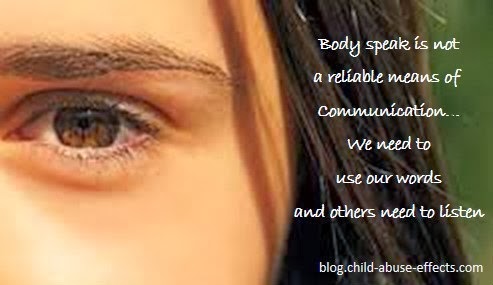 Facts are facts. Body speak is not a very effective way to communicate.

But when it comes to being female, we do think we can tell what they're thinking. And we are oblivious to the irony that our logical mind tells us one thing, but society has taught us another.

That special look a guy interprets as "she wants me" is likely "she wants to get to know you."

When she touches your arm, it's not an invitation to get laid; she's telling you she cares about you. She's being affectionate.

When she puts her head on your shoulder, she's being affectionate and asking you to be affectionate with her, like with an arm around her. She isn't telling you to feel her up or that you're about to get lucky.

Given the way males and females have different body speak, if we don't actually communicate with our words, it's easy to see how there can be a misunderstanding.

That's why it's so important to communicate with real language and to be mutually respectful. In other words, one person talks while the other person listens.

But beyond the miscommunication between males and females that happens when we rely on body speak, is another more disturbing aspect we attribute to female body language.

As a society, we still hold onto the neanderthal belief that a girl is somehow "asking for it" by virtue of what she is is wearing, the way she looks, walks, holds herself, the way she carries her sexuality. When what she's wearing and the way she looks is a creative expression of her Self.

We tell girls that the way they look is an "invitation" for sexual activity. Even unwanted sexual activity. We say that if she's already sexually active, she's free game for every guy around.

We tell her to keep her skirt long and her top high in an effort to keep her sexuality hidden. All under the guise of "protecting" her from the advances of guys that she isn't physically strong enough to fend off.

Yet we don't teach males that it's not okay to take what isn't their's to take.

We encourage sexuality in our boys. We tell them that they can't control their natural urges. That a woman's body is theirs for the taking when those urges "take over".

We don't hold males accountable for acting on their urges. Urges males are perfectly capable of controlling, difficult as it might be. We give them a pass. We brush off their actions as boys will be boys.

We blame the girl when a guy doesn't control himself. We brand the girl with unspeakable shameful names, even when she's been the victim of a sexual crime. We tell her that she's responsible for the actions of another because of her body or the way she expresses it.

What does this say about the way we see our females? That their sexually is some type of power over men? That a woman's sexuality is not really hers? It's up for grabs? Figuratively and literally?

And what does that say about the way we see our males? That they are so controlled by their nether regions they are incapable of making a responsible decision? That they are at the mercy of their reproductive parts? That those parts have a mind of their own?

This backward way of thinking has brought us to a culture of rape. A culture so deeply entrenched in our collective psyche that we automatically blame the female and protect or make countless excuses for the male in instances of sexual assault and rape.

When an arsonist burns down someone's home, we don't blame the homeowner just because they built their home out of wood. We make the arsonist responsible.

Yet we do the exact opposite when it comes to sexual assault. We look for ways to blame the victim. Especially when the victim is female and the perpetrator is male.

We need to teach our boys that it's not acceptable to assume that a look from a girl or the way she looks is a solicitation for sexual intercourse. A solicitation they are free to act on.

We need to teach boys that body speak is not a reliable means of communication. They need to learn that consent is something that is freely given and given along every step of the way. And that they must get consent in order to get lucky.

And we need to teach boys that they will be held accountable when they take someone's body for their own sexual gratification.

If you're in the Merritt area on Thursday, March 13th, I'll be presenting my Talk Before Touching Program at Merritt High School at 9:45 a.m., then again at Nicola Valley Institute of Technology at 1 p.m.  Call the schools for more information. I hope you'll join us.

Posted by Darlene Barriere at 10:50 AM