The Regenerating Power of Adversity 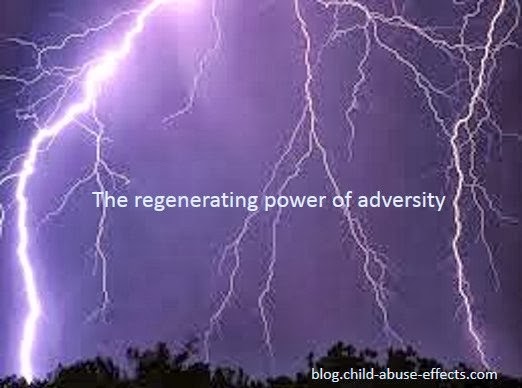 Can coming from a life of adversity be a powerful thing? Can it be regenerating the way lightning or any kind of storm can be? Is it possible to see whatever you endured, even the terrible and horrible things, in a positive way?

I believe it IS possible. But only if we consciously choose to see the positive aspects in whatever we endured.

Instead, our pain takes over. Our memories are too difficult to process. We blame our abusers or the people who hurt us. We tell ourselves they took away our potential. They stole who we could have been.

But is this really so? Do we as adults who are capable of making our own choices have the right to blame others for what our lives have become?

Then I came to realize that my abusers were no longer in a position to abuse me. That the abuse had stopped. That all that was left were my memories of that abuse.

I learned that my body didn't know the difference between living an actual abusive situation and simply remembering one. The truth is, I was living in a constant state of fight-or-flight. The chemicals in my body resulting from the never ending fight-or-flight state would shave years off my life.

The body wasn't intended to live in such a constant state of high alert.

Yes, there were the effects of the abuse. But I came to understand that even those effects were among the things I could control. If I chose to. So I chose to think differently.

I chose to see what I endured as something positive.

I chose to use what happened to me as the training ground necessary for me to help others who have come from something similar.

I choose to see the regenerating power I hold as a result of what I endured. I wouldn't do what I do as well as I do it if I hadn't come from adversity. I probably wouldn't do it at all otherwise!

That doesn't mean I wish abuse on anyone. Nor does it mean that I won't step in to stop abuse when I see or am aware of it. And it certainly doesn't mean that I'm judging those who are having challenges dealing with their past. I've been there myself.  I understand that place. And I believe in meeting people where they are.

I'd love to hear from you. Do you believe there is power in coming from adversity?