When Shame and Blame is Not Yours to Bear 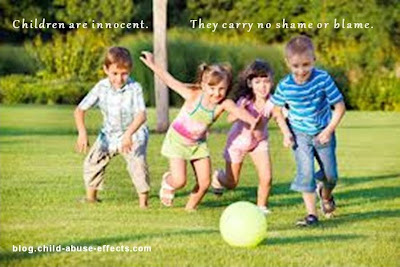 Is a child to blame for being sexually abused? Of course not. Anyone who blames a child for being the victim of such a heinous act is clearly not in their right mind. Yet the adults who were sexually abused in childhood often do blame themselves.


They blame themselves for not stopping the abuse.
(As if they could have.)

They blame themselves for not telling.
(As if they believed they would be believed.)

They blame themselves for liking the attention.
(As if they are to blame for being a vulnerable child in need.)

They blame themselves for feeling loved.
(As if they are capable as children to determine what true love is.)

They blame themselves when their abuser abuses others.
(As if they are responsible for what the abuser did.)
(As if the reasons above make them responsible.)

Too many adults don't believe when a child discloses. Not only is this lack of believing a huge betrayal in the child's life, it sets that child up for further abuse. And later yet, for abuse in relationships.

If you are a survivor of child sexual abuse, the next time you go to blame your Self for that abuse, try this 5-step exercise:
We can usually see the above logic when we apply it to others, because it only requires logic. Not so easy to apply that logic to our Self because emotional judgments enter into the picture. Judgments that we don't usually apply to others who are in the same boat.

Shame and blame for abuse belongs squarely on the abuser.
Period.
End of story.

Posted by Darlene Barriere at 10:24 AM