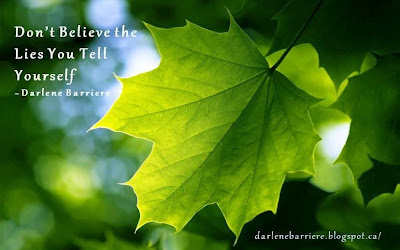 I am frequently asked about my own healing. How I came to heal. How I overcame. But among the most asked questions relates to thoughts. The negative messages we take with us into adulthood.


Darlene, you say change your thoughts, but it's just not that easy. I don't find talking about them helpful at all. How do I change my thoughts when all I've heard all my life are negative messages.

I know only too well how challenging it is to overcome the negative messages. I was told how stupid, useless and worthless I was just about every day of my life growing up. And even when I wasn't told outright, the message was clear in the body language, the beatings, the relentless screaming and yelling.

And blame. There was so much blame. Everything was my fault. My mom and dad fighting. My fault. Late getting up. My fault. Misbehaviour from one of my younger siblings. My fault. Rejection was a daily ritual, one I learned oh-so-well.

Healing from these negative messages was difficult because I actually believed them. But then one day, I came to realize that my abuser had no credibility. I didn't respect anything she said, so why would I respect the messages she'd sent me. That's when everything changed.

I came to realize that the very things my mother blamed me for or accused me of were more a function of how she felt about her Self than they were about me.

I came to realize that my mother was out of her mind. Literally. And as a result, I could no longer hold her in contempt.

I came to realize that I had taken the torch from her. That I was doing a darned good job of taking over the abuse. All the things she blamed me for and accused me of, I was blaming and accusing myself of. How could I keep putting the responsibility on her for what she'd done to me when I was doing it to my Self?

I came to realize that I could take back my power. That I could choose to either believe what she called me, directly and indirectly, or I could see all of it for what it was. Lies. Lies from a woman with no credibility.

I came to realize that I was incredibly powerful, and that I had always BEEN powerful. I also came to realize that my mother saw that power and was threatened by it. So threatened that she felt the need to tear me down in order to lift herself up. But her strategy failed to produce the results she sought. What happened instead was that my mother was taken further and further down the path of self destruction.

I came to realize that I could question everything I had ever been told. Everything I ever believed about my Self. So I made a conscious choice to change all that. To change my thoughts.

For every negative message that popped into my head, for every despicable name I'd ever heard and repeated to my Self, I wrote it's exact opposite. It didn't matter whether or not I believed the new positive message. It was more important to just get it down on paper. Putting on paper was a permanent declaration of my new found emancipation.

Then I needed proof. Something concrete to hang my hat on. Something that would trump the negativity. Why not give my Self an example...what a thought!

Worthy and lovable took me longer to come up with examples. But I realized I was walking not running along my healing path.

The tools of healing can be vast and varied. Some are useful most of the time. Some need tailoring or tweaking. I found the most useful were the ones where I had to take responsibility for my own thoughts. As long as I carried the thoughts and beliefs of someone else, anyone else, I was giving up my power. I wasn't being true to Who I Really Was. And Who I Really Was was amazing, if only I was open to meeting her.

And meet her I did! I meet her each and every day when I wake up. When I interact with the world. When I say goodnight. I meet her in the morning when I am grateful to start a brand new day. And when I'm open for kindness, love, understanding, compassion, knowledge, wisdom, creativity and laughter. And when I believe that something wonderful is going to happen (something wonderful DOES happen...everyday).

How can you change your thoughts?

Today so far, my something wonderful is that I shared a little about my Self, something that might be able to help you. Life really is wonderful, and now I know that so am I.

What positive attribute can you find about your Self today? Give yourself an example. Then another and another.

Posted by Darlene Barriere at 7:41 AM